Renowned for its famous university, Cambridge has a reputation as one of the most prestigious schools in the world. But, there’s more to the town of Cambridge – which also bares the school’s name – than just the university. I made my way north from London to Cambridge to find out what this town is all about.

Arriving in Cambridge, it had been a few hours since my breakfast, so I headed straight to get a bite to eat. A friend of mine had recommended going to Fitzbillies, a popular Cambridge cafe, to try one of their famous Chelsea buns. A Chelsea bun is a British currant bun similar to a cinnamon roll, but with raisins. Fitzbillies has been producing them since 1921, so I figured that was just what I needed to get my day started – I’ll tell you that it didn’t disappoint.

I took my Chelsea bun to eat by the River Cam because next up was a punting boat ride with Let’s Go Punting. A punt is a flat bottomed boat, and is pushed along with a pole by the punter. As we kept snug on the boat with blankets, our punter pushed us by the backs of the various Cambridge colleges and gave us a bit of history on the school. It should come us no surprise that Cambridge has many notable alumni – Steven Hawking, Charles Darwin, and Sir Isaac Newton – just to name a few. The university also has the most Nobel prize laureates in the UK, a fact that they like to emphasize is more than Oxford. 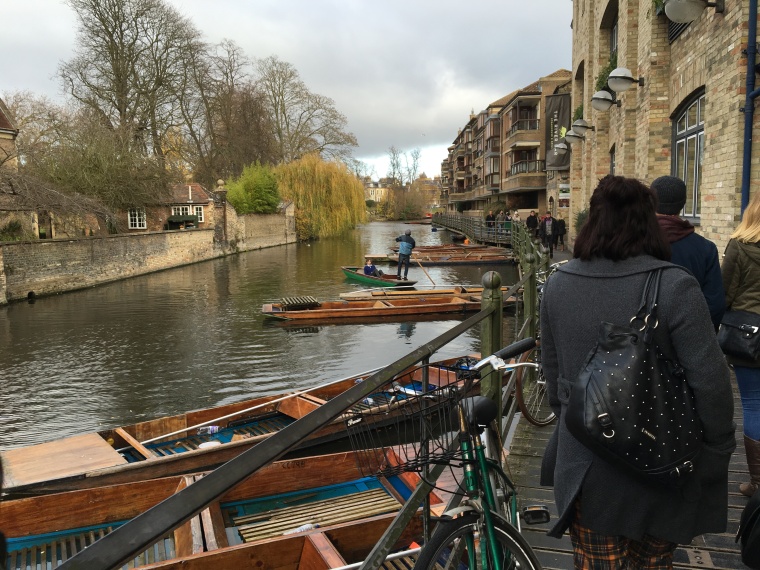 Throughout the tour I kept wishing that I had known how charming Cambridge’s colleges were so I could have applied there for my university studies… alas, I’m not sure I would’ve gotten in and I already have two great alma maters.

As it was nearing evening by the end of my walking tour, I took in some of the Christmas lights around town and strolled around the market stalls in front of Great St Mary’s Church. After a hot drink to warm me up, I headed back the train station to make my way back to London.

I really can’t recommend a day trip to Cambridge enough; I was blessed with a (mostly – this is England after all) sunny day so strolling by the River Cam was really peaceful and I let my mind wander to a bit of nostalgia for my university days.

Getting there: From London, you can take a Great Northern train from Kings Cross or Finsbury Park to Cambridge. It’s just over an hour each way. From Finsbury Park, I paid £18 for a day return ticket.

Punting tour: I did a 45 minute shared tour through Let’s Go Punting, who I highly recommend. You can do a chauffeured tour, or try to punt yourself (though I’ve been told it is NOT easy). I purchased my ticket online beforehand for £12.

Walking tour: My walking tour was of the Medieval Colleges run by Visit Cambridge Official Tours. Other tours are available, so check their website to see which suits your interests. The two hour tour was £14.

2 thoughts on “A Day Trip to Cambridge, England”