I had been to Ireland in 2013, and was curious on whether Northern Ireland would feel the same. I was surprised that it did not; and I was especially surprised at how beautiful I felt the northern coast of the country was. I ended up doing a day tour to the Antrim Coast on Saturday, and spent Sunday visiting the Titanic Museum and St. George’s Market.

The rope bridge looks really cool, and I was so excited to take a selfie on it (even brought my selfie stick!), but I actually was scared when I got on the bridge… it’s not super steady and despite the sign saying a max of 8 people should be on the bridge at the time there were about 12 of us. I also didn’t want to drop my phone, so instead I managed to take the picture below (on the left).

I also really loved seeing the Giants Causeway, but I made the mistake of not thinking that Northern Ireland would be much colder than London, but it was MUCH colder… and windy… so I took the picture below (on the right) and then immediately got back to the warm bus to get back to Belfast. 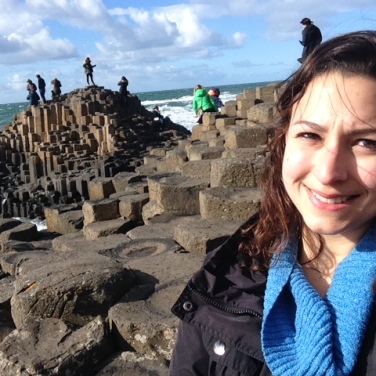 Sunday I went to the Titanic Museum, which was incredibly well done. I spent over two hours walking around and really taking it all in. It was well laid out – it started with the history of Belfast, the building of the Titanic there, giving insights into the people who help build the ship, then onto its maiden voyage, sinking, and discovery efforts that have been made.

After I went to St. George’s Market which is a Sunday market packed with local arts and crafts, live music, and food stalls in the heart of downtown. I grabbed a plate of paella for a wallet friendly £5, purchased some enticing looking fudge, and relaxed listening to the music.

Before I knew it, it was time to head back to the airport and head home.

Have you been to Northern Ireland? Would you want to go?