Wow – I’ve been in London for six months! Even saying that feels unbelievable.

Just over a year ago, moving abroad was just a dream for me. I talked about moving to England with family and friends, but it still felt so foreign, so distant, and in all honesty, I wasn’t sure if it was totally attainable.

But then I did it. After applying to dozens upon dozens of positions for several months, I was able to land a interview for a job in London. Even with a Swiss passport which lets me work in the U.K., it was still difficult to get an interview from abroad.

I was SO nervous for my interview! I loved London as a tourist, but would I also like living there? I debated this question the night before my interview. But then the interview happened and they offered me the job that day and something in me knew I had to do it.

I moved five weeks later, at the end of February.

Moving did feel hard at first; there were so many unknowns. Would I make friends? Would I be able to afford London? Should I have stayed in the U.S.? Would I like it? What if I hated it?

I also was sometimes overwhelmed with having to figure everything about how to move a new country out, by myself, while starting a very busy new job. Moving into my flat, getting utilities set up, opening a bank account, learning the lay of the land in a new city, and adapting to British culture – all were aspects I had to overcome.

It was also hard early on to sometimes deal with the perception of Americans that people tend to have. Trump, politics, and shootings as of late don’t help the already not-great image that many people have of the U.S. I sometimes felt very frustrated (and even upset) when I had to defend that I still love my country despite these things.

But then at one point, things started to change. After about a month, I finished getting the utilities set up in my flat and opened a bank account. I made friends and started having a social life. I met my now boyfriend, Mark. And, the main reason of why I moved in the first place, I started traveling around Europe. I also finished my Master’s, which was a huge personal accomplishment, and opened up a lot of free time.

Where I Am Now

I feel settled now in London. My flat and neighborhood feel like home. Not in the same nostalgic way I feel about my hometown, but as a ‘home for the moment’ sort of way. I have my local grocery store, restaurants, cafes, park, and pubs. I’ve figured out what neighborhoods I like to spend time in, and which I’d like to still explore.

I’ve had quite a few visitors, which has been a great way for me to see the tourist sites (and bring friends and family to my favorites!). I have been pleasantly surprised with how many people have made it to visit – Marianna and Aaron, Karen, Sara and Trey, my parents, Lauren, and Suzie have visited. My sister Angie is also coming in October. 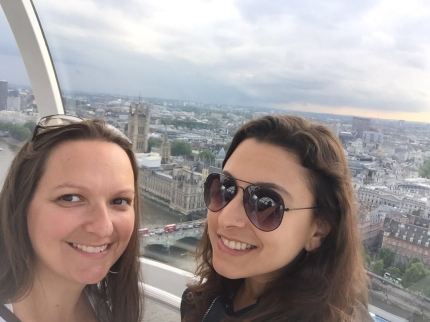 Karen and I in London 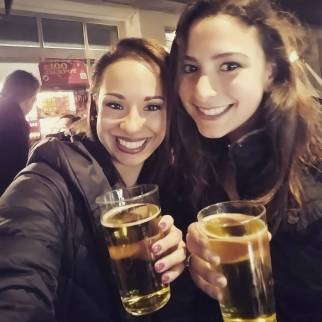 Lauren and I in London

I also adjusted to the work I was doing. The project with Vodafone I manage can be demanding, but at my six month review this past Monday I was given an ‘exceeding expectations’ review by my manager. My immediate team is amiable and I really try my best to make our project run as smoothly as possible.

I’m also fortunate to have a few good friends now, and have deepened those relationships. I also am very happy with Mark and glad that our relationship has progressed well.

The wander luster in me has been overjoyed since I’ve been able to travel quite a bit since moving. The majority of my trips are weekend jaunts, but from London it’s not very expensive, and I try to maximize my time in each location. Thus far I’ve made it to Norway, Northern Ireland, Wales, Scotland, Belgium, Italy (Milan for a day), Spain, and Switzerland.

I know that moving here has changed me for life. Probably in many ways that I won’t don’t really realize yet, and won’t really realize till I’m gone. It’s one thing to talk about moving to to another a country, but another to do it. Even when I do move back to the U.S., I doubt this will be my last time living abroad.

Till next time all!

One thought on “A Reflection: Six Months in London”