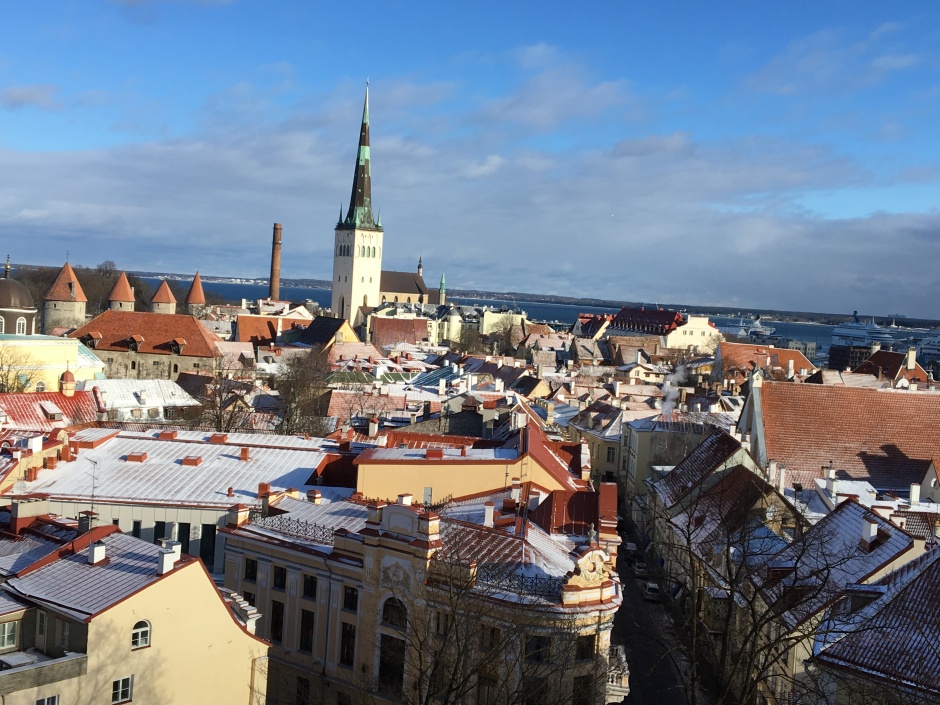 Following the south to north route I planned for my Baltics trip, my last stop traveling through the Baltic capitals was in Tallinn, Estonia. Tallinn’s wintry touches proved to make it my favorite of the three capitals, with an aura of beauty as if you had stepped back in time whilst meandering its cobbled streets.

I based my stay in Tallinn in the Old Town area, which as snow flakes fell softly on the enchanting Gothic architecture, was truly magical. The Old Town, dating back to the 13th century, is very well preserved and has been named a UNESCO World Heritage Site.

Old Town is centered around Town Hall Square, with cafes and restaurants dotted around the square’s pastel colored buildings. The buildings are former homes and warehouses of the Hanseatic merchants who were instrumental in the beginnings of Tallinn as a trading city.

The most scenic area of Tallinn’s Old Town is Toompea Hill. Toompea Hill is historically where the Danish aristocracy lived, separated from the lower Old Town commoners by walls and towers. The area today is home to many embassies, but is most notable for tourists because of the Kohtuotsa and Patkuli viewing platforms that provide expansive views across Old Town and beyond.

Also in Toompea Hill is the Alexander Nevsky Cathedral. The cathedral is a classic 19th century Russian Orthodox church, which quite prominently stands at the entrance to Toompea Hill. Despite it being architecturally attractive, Estonians have negative connotations of the cathedral as it is viewed as symbol of the oppression they faced during Soviet rule.

Across from the Alexander Nevsky Cathedral is Estonia’s baroque Parliament building, which to my delight was a lovely salmon color. The parliament building is housed in the former Toompea Castle, which dates back to the 9th century, although the baroque additions you see today were added on in the 18th century.

I was fortunate enough to be in Estonia during their Independence Day. Although true total independence for Estonia came after the fall of the Soviet Union in the 1990s, on February 24, 1918 the Estonian Declaration of Independence was printed and distributed in Tallinn which was the founding act for creating the Republic of Estonia.

Independence Day was marked with a military parade at noon in Freedom Square. A large Estonian flag was hoisted onto one of the buildings facing the square, as a procession of soldiers, tanks, and the military band marched along.

Two of my favorite places I ate in Tallinn were Kompressor and the Three Dragons.

Kompressor is a pancakes restaurant where both savory and sweet pancakes are offered. The pancakes are huge, so you’ll no doubt leave feeling satisfied. Prices for a pancake range from €4.60-€5.50.

The Three Dragons or III Draakon in Estonian is a medieval-themed restaurant underneath the Town Hall in Tallinn’s Town Hall Square. You order at the counter from staff who maintain a medieval character and then eat without silver wear by candlelight. It’s an experience that I recommend when visiting Tallinn.

Have you been to Tallinn? Would you want to go?

2 thoughts on “Highlights of the Gem of the Baltics: Tallinn, Estonia”